To have the optimal experience while using this site, you will need to update your browser. You may want to try one of the following alternatives:

Why September is the Peak Month for Hurricanes and Tropical Storms 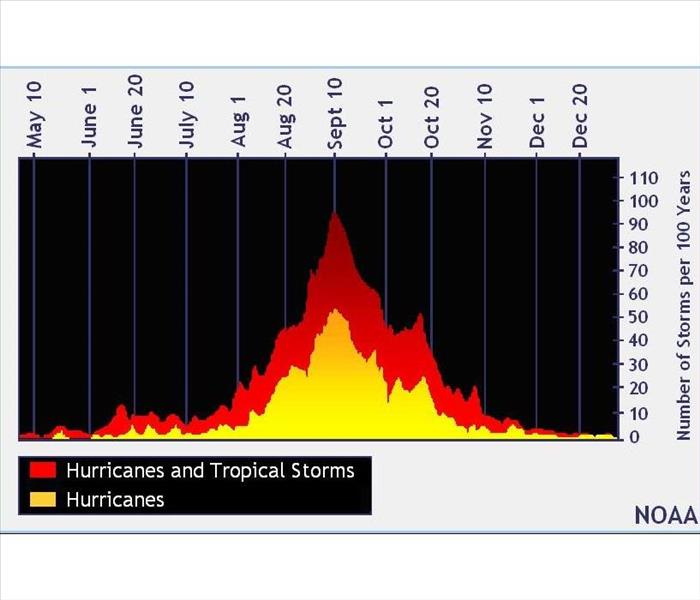 September 10th is historical the most active day for hurricanes!

The Atlantic Hurricane and Tropical Storm season runs from June 1 through November 30.  Nearly all tropical storm activity in the Atlantic basin occurs during those dates with it peaking between August and October.  Statistically, September 10 is the most likely day to find a tropical cyclone somewhere in the Atlantic.

You may ask why.  It’s because of both the wind and water.

Wind shear may prevent storms from organizing into a tropical cyclone.  Wind shear is the variation of the wind's speed or direction over a short distance within the atmosphere. Stronger wind shear in the spring fades through June and July, and by late August, wind shear reaches a minimum.

The changes in climate create wetter and bigger storms.

Also to note is the temperature of the ocean.  As summer passes, the water temperature in the deep tropics rises which is the result of sunny days, warmer air temperatures, and more moisture in the atmosphere. Warmer ocean temperatures drive greater storm activity.

With the lack of wind shear in the atmosphere combined with the warmth of tropical waters, it may cause the waves off of Africa to strengthen into a hurricane.

The number of tropical storm and hurricane days for the Atlantic Basin spikes in mid-September.

The patterns vary in different areas of Earth.  For example, in the Northwest Pacific basin tropical cyclones occur regularly, throughout the year. Therefore, there is no "typhoon season" there, though there is a lull in February and March and a peak in August and September. In the North Indian basin, typhoons peak in both May and November.